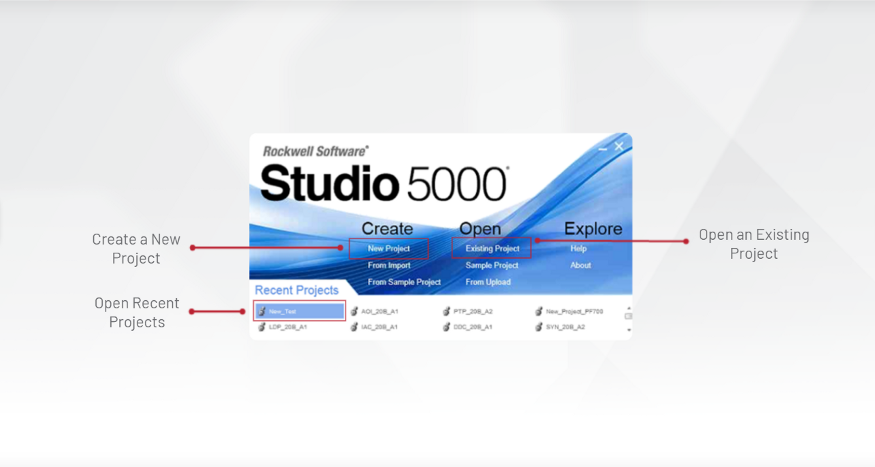 With the Studio 5000 Logix Designer application, you can;

From this splash screen, you can use the various buttons to;

You can do more from the splash screen such as opening sample projects or accessing the help system, but the three actions listed above are the most commonly used.

After opening a project, the splash screen is closed and the project is opened. Let’s look at the main components of a Studio 5000 Logix Designer project.

The pane on the left of a Studio 5000 Logix Designer project is called the Controller Organizer.

This pane organizes the entire project into a hierarchical tree structure. The components are ordered in order of execution within the software-generated folders.

The Controller Organizer functions similarly to the Windows Explorer on your machine and provides quick access to all of the components in the project.

The other tab in the left pane of a Studio 5000 Logix Designer project is the Logical Organizer.

The Logical Organizer is similar to the Controller Organizer in that it is a hierarchical tree structure that organizes the tags and code of a project.

The Routine Editor is used to view and edit opened routines.

This is the area in Studio 5000 Logix Designer where you actually write code for the project.

The Tags Window is used to view and edit the currently opened tag collection.

The Output Window is made up of three tabs. Each tab has a specific function. The tabs available here are;

The Errors Tab lists any errors or warnings that are discovered during project verification.

The Search Tab lists the result of a project search.

The Watch Tab is an area where a Studio 5000 Logix Designer user can monitor data. By default, the Watch Tab displays the data of the currently opened routine but it can also be used to monitor a customized data set.

Each of these tabs can also be opened from the View menu in Studio 5000 Logix Designer.

The Online Bar is a toolbar that displays operating information about a controller with an online connection.

Through the Online Bar, you can change the operating mode of the controller.

The Quick View Pane provides context-specific summary information about the component currently selected in the Controller Organizer or Logical Organizer.

In this article, we learned about the most important components in a Studio 5000 Logix Designer project.