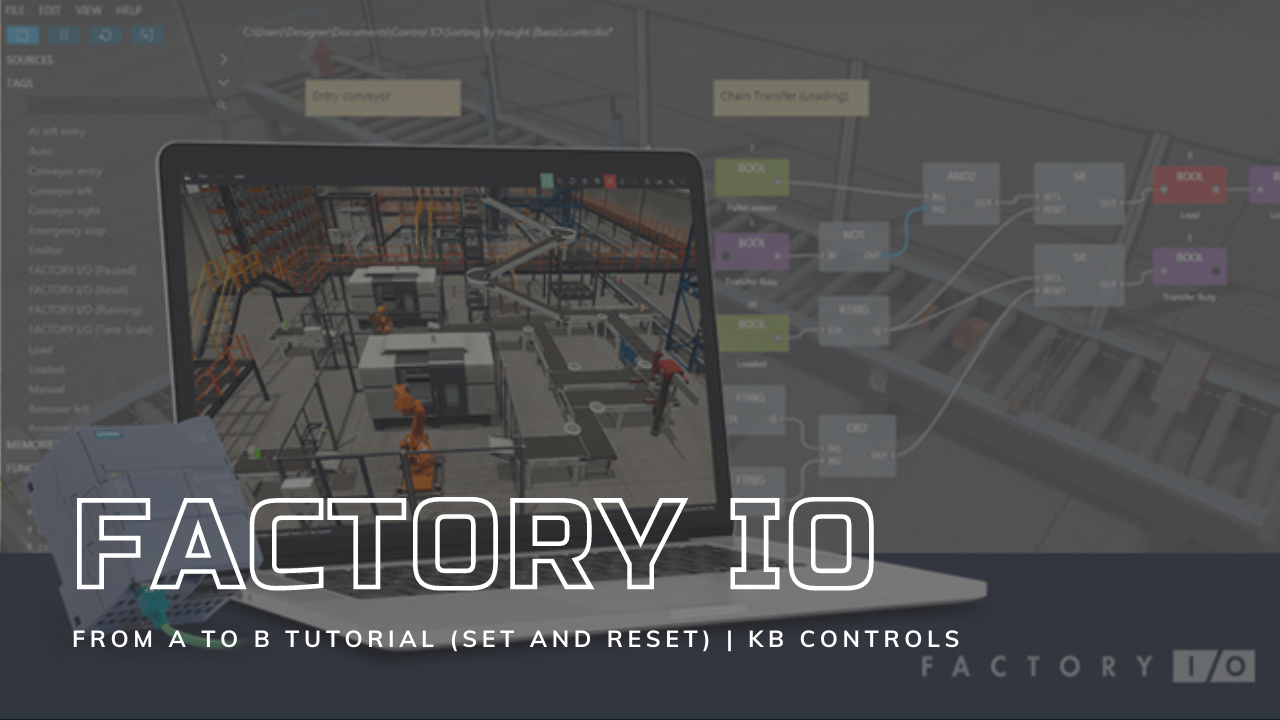 If you have taken my free PLC Bootcamp, then you know that I am a huge fan of Factory IO for learning PLC Programming by simulating common industrial automation applications.

Since launching PLC Bootcamp and introducing Factory IO to my audience, I have received a few emails asking for advice on how to solve the pre-built scenes available in Factory IO.

Instead of answering those emails privately, I have decided to put together a series of tutorials that explain how to write programs for each Factory IO scene and how to extend the scenes to make them more realistic.

In this post, I will show you how to implement a solution for the “From A to B (Set and Reset)” scene and give you a challenge to test your programming knowledge.

If you haven’t already, I suggest that you head over to the Factory IO website and install Factory IO so that you can follow along with this tutorial.

Already have Factory IO installed? Then let’s get started.

Open the “From A to B (Set and Reset)” Scene

Launch Factory IO from the Start Menu of your machine and click on Scenes to open the list of pre-built scenes available for Factory IO.

Before we can program a solution for this scene with the built-in Control I/O editor, we have to configure the Control I/O driver.

In the Driver Selection dropdown, chose Control I/O. Control I/O is the built-in soft PLC and programming environment for Factory IO that allows you to write and test PLC programs in a graphical environment.

After selecting the Control I/O driver, the Control I/O editor opens. This is a graphical code editor that can be used to write PLC programs for Factory IO simulations in a language similar to Function Block Diagram (FBD).

What do we want to accomplish in this scene?

Basically, the first conveyor, called the entry conveyor, should run continuously to transport the tote to the second conveyor.

The downstream conveyor should not start running again until the tote is removed and the photoelectric cell is no longer occupied.

How can we create that logic in the Control I/O editor?

To create this logic, I have added the entry conveyor tag (1) and a Boolean Source variable to the canvas (2). I then connected those elements together to complete the logic by dragging and dropping between them (3).

We can set the value of the Source Boolean variable to true by clicking on the power icon in the instruction. Now the entry conveyor will run continuously while the Factory IO model is running.

Now let’s look at the logic for the downstream conveyor.

To implement this behaviour, we can use an SR, short for Set-Reset, or RS, short for Reset-Set, Function Block. The difference between these two instructions is the priority.

In an SR instruction, the setting action has the priority, so if both inputs are activated then the associated tag will be set to true.

In an RS instruction, the resetting action has the priority, so if both inputs are activated then the associated tag will be set to false.

In our application, we will use the RS Function Block. In general, if you have moving parts like a conveyor, then reset should be the priority. That way, the movement stops in the case of an abnormal situation.

I add an RS instruction to the canvas.

Finally, we can connect the Conveyor tag to the output of the Function Block.

Back in Factory IO, press the play button to run the scene.

Our logic seems to be working correctly.

In Factory IO, you can add multiple products to a model by using an “Emitter” component.

To add an Emitter to the model, select the tote and press delete to remove the tote. Once the tote is deleted, drag an Emitter from the toolbox onto the position where the tote was.

Now when you run the model, multiple products are introduced to the model. You can see that when the downstream conveyor stops running, the entry conveyor continues to run and products eventually crash into each other.

Although this highlights how good the physics engine in Factory IO is, it is not a great situation for the products being transported.

Your challenge is to update the logic in Control I/O to stop the entry conveyor when the downstream conveyor is not running.

I am really interested in hearing how you get on with this challenge. If you want, you can let me know how you solved them (or where you got stuck), by dropping an email to ken@kb-controls.io.

I look forward to hearing from you. 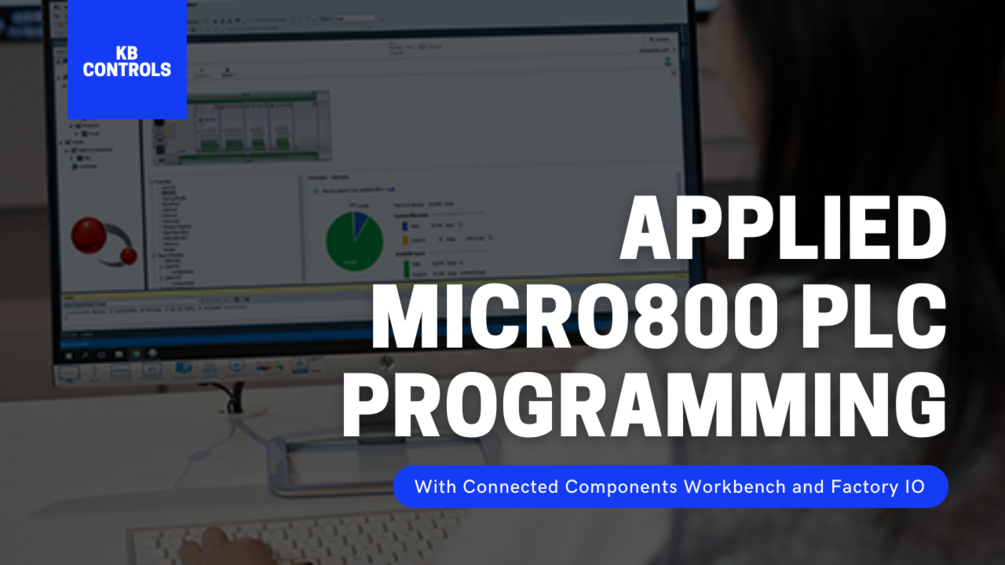 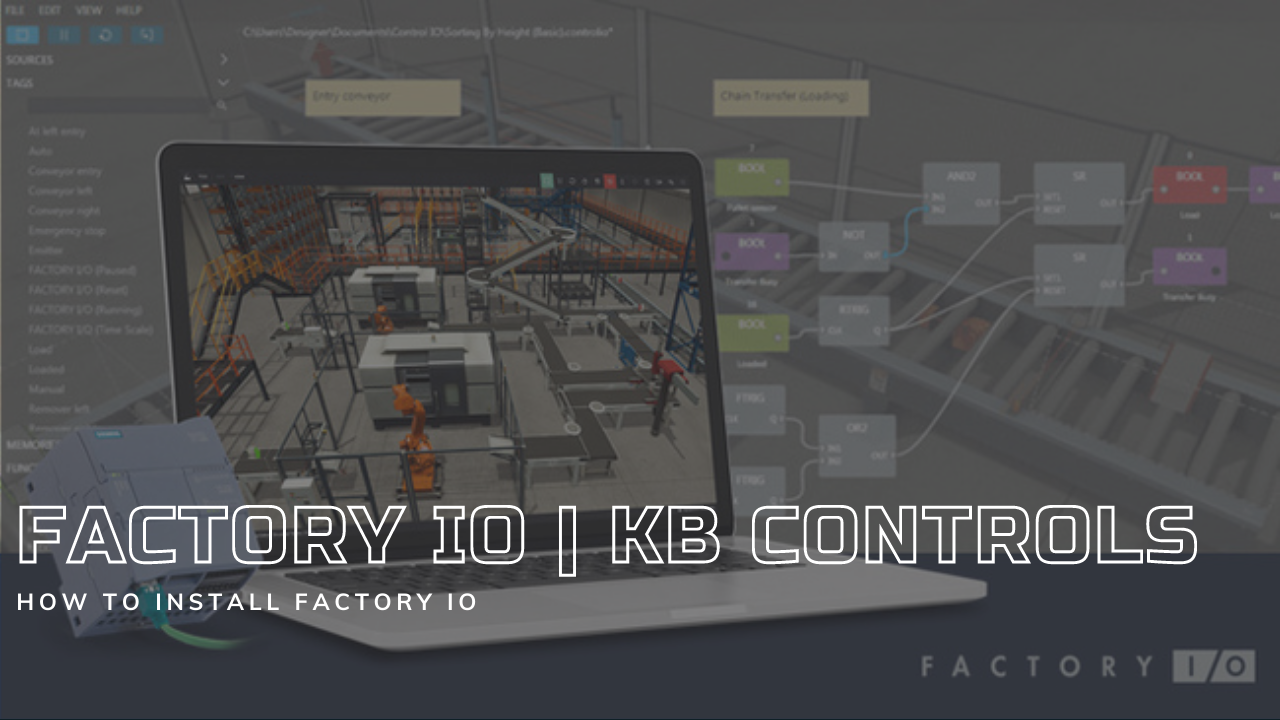 How to Install Factory IO

A step-by-step guide to installing Factory IO by Real Games on your machine. Factory IO is a cutting-edge 3D simulation environment for simulating industrial automation applications and testing PLC programs from all manufacturers. 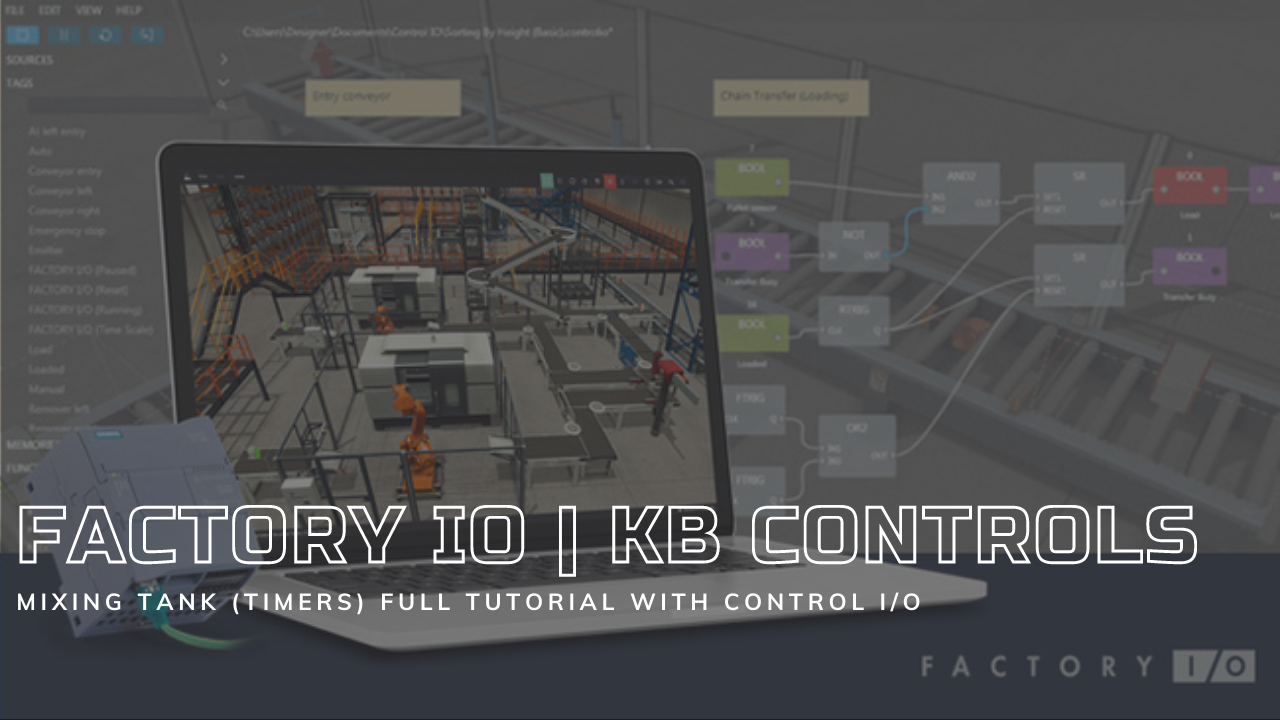